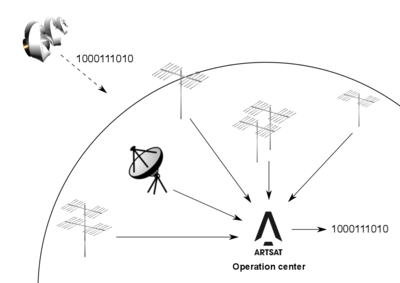 One of the missions that is central to DESPATCHis an experiment in what we call "cooperative diversity communication." In this experiment, we attempt to collect signals from the spacecraft received not only at our own ground station in Tokyo, but at many ham radio stations around the world, in order to reconstruct the original data from the spacecraft. In this page, the details of the experiment and how to join it are explained. 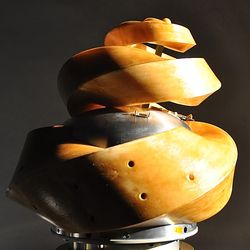 "ARTSAT2: DESPATCH" is the second mission of the ARTSAT project. This spacecraft, 50x50x45 cm in size with a mass of 32 kg has a helix-shaped segment making it a beautiful sculpture. DESPATCH will be launched into an Earth escape trajectory at November 30, 2014 13:24:48, JST (UTC+9) and moves away from Earth soon after launch. The simulation shows that it reaches lunar distance (385,000 km) from Earth within 24 hours of separation from the launcher.

The spacecraft, carrying a CW beacon in the 430MHz band, will transmit the "generative poetry" created in deep space for only a week until it reaches a distance of 3 million km from Earth. However, the signals from DESPATCH are very weak and will be fading, because the spacecraft has no attitude control system and uses only a low-directivity antenna.

The ARTSAT project asks that you attempt reception of these very weak signals at your radio stations. As a main mission of DESPATCH, we are conducting an experiment in cooperative diversity communication. In the experiment, we hope to collect signals from the spacecraft received not only at our own radio station in Tokyo, but at many ham radio stations around the world. The design is to have transmissions decoded by volunteer ham-radio operators throughout the world forwarded to our data server via the Internet for reconstruction back into the original poetry from the spacecraft. With this experiment, we would like to verify the practical effectiveness of cooperative diversity communication.

DESPATCH is going to be launched at November 30, 2014 13:24:48, JST (UTC+9) along with the Hayabusa-2 asteroid probe, and injected into an earth escape trajectory about 2 hours later.

The spacecraft, carrying a CW beacon in the 430MHz band, will transmit the signals for only a week until it reaches a distance of 3 million km from Earth. We are hoping to receive three types of data — the generative poetry, housekeeping data, and a simple beacon. Accordingly, we have divided the 1 week mission period into three phases based on the spacecraft’s distance from Earth, as shown in the table below. In each of these phases, a different type of data will be transmitted by the spacecraft.

We conduct the experiment for the cooperative diversity communication only in the phase 2, but we also appreciate your helps and reception reports in phase 1 or phase 3. The phase 2 runs for almost 100 hours as shown in the figure. 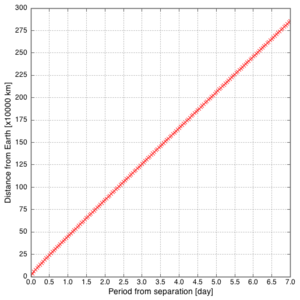 As mentioned above, the mission period is divided into 3 phases and different kind of data are received in each phase on Earth. Herein, the format of the data in each phase is explained.

As such, we are attempting to gather all bit strings, received and decoded by ham operators around the world through the Internet so the bit strings can be patched together to reconstruct the original poetry. The figure below shows the reconstruction process. In the figure, the word “DESPATCH” is reconstructed from data acquired by five ham operators. Note that the red letters are those that were rejected by majority vote.

Please note that the Manchester code is used for encoding. Although the signal speed is 1 bps, the on/off of the CW can switch every 0.5 second in the shortest since the Manchester code encodes each of the binary states "1" and "0" as a rising edge (CW off→on) and a falling edge (CW on→off). For example, the signal carrying CP0 is something like the "Received Signal" in the figure below.

The file below is MP3 sound data which is converted from the signal carrying CP0 (CW on: no sound, CW off: sound in 440Hz).

Phase 3 is the reception of a radio beacon whose period cycle is 3 seconds and duty-ratio changes depending on temperature of the spacecraft batteries (T = 0x00~0xFF), as shown in the figure below. Spacecraft temperatures can be derived by simply detecting periodic changes in the faint signal.

In the experiment on the cooperative diversity communication approach, we are attempting to gather all bit strings, received and decoded by ham operators around the world, and synchronize them for reconstruction back into the original poetry from the spacecraft. For this reason, we are asking every operator to send us not only the decoded bit strings but timestamps, which will tell us when each bit was received.

And, using the "Add a row" button, you can report multiple bit strings received at different moments at once.

You can upload a text file in which bit strings and timestamps are written in the reception report page. Points to note are the same as what are mentioned above, but you should use the UTC as the time standard of timestamps and write like this: "yyyy.MM.dd hh:mm:ss"

For examples, if you began to receive the signal carrying CP0 (like the "Received Signal" in the figure above) at November 30, 2014, 11:00:33 UTC, you should write the text below in a text file you want to upload.

And, if you want to report multiple bit strings received at different moments at once, you can add new lines in the text file.

You can upload a sound file which records the signal in the reception report page. In this case, you should enter the time when the recording started in the "Comment" form. You should use the UTC as the time standard of the time and write like this: "yyyy.MM.dd hh:mm:ss"

For this mission, we are asking every operator to report the reception frequency with a timestamp. To report, you can use the special forms ("Received Data and Frequency with Time stamp") in the reception report page. Please notice the following things when you report: 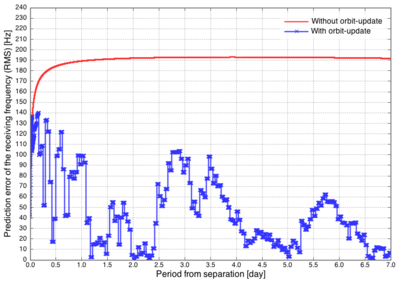 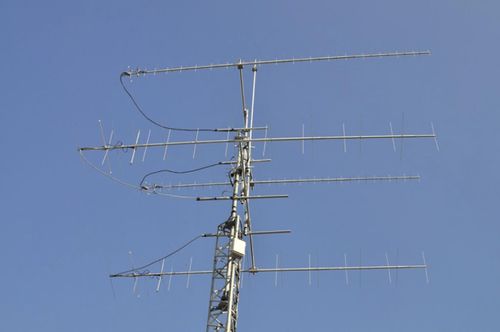 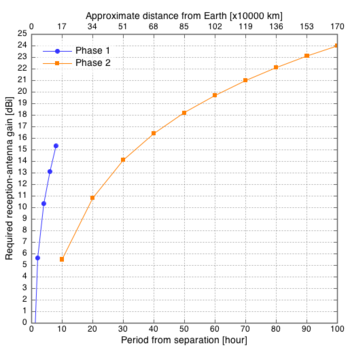 Finally, a PC whose system time is correctly adjusted is needed to process the data you received. As mentioned above, in the phase 2, we will attempt to gather all data received around the world, and synchronize them for reconstruction back into the original poetry from the spacecraft. To make this process done correctly, the error of the system time should be less than 0.5 second, considering the on/off of the CW can switch every 0.5 second in the shortest. For this reason, you should adjust the system time in some way, e.g., by connecting the PC to the Internet and setting the NTP (Network Time Protocol) correctly.

Since Despatch is injected into an earth escape trajectory, TLE is unavailable. Instead, we opened a web-page for the spacecraft tracking (both antenna-pointing and receiver-tuning).

Please go to the page and enter your geographic location, and you will get nearby passes and a table with 1 minute steps that gives you AZ, EL, Freaquency, and so on. As the apparent movement and the change of the Doppler shift are slow, manual pointing of the antenna and tuning of the receiver every 10 minutes or so will do.

Or, you can get the same information on the applications you developed using ARTSAT API.

The receiver is to be tuned to the frequency of DESPATCH (437.325MHz) +/- the Doppler shift and your receiver’s frequency error. The Doppler changes very slowly and is mainly due to the rotation of Earth. In the tracking page above, you can pick up the reception frequency every 1 minute.

The degree of the Doppler shift depends on your latitude. The following figure gives the expected doppler frequency changes around Tokyo, Japan. 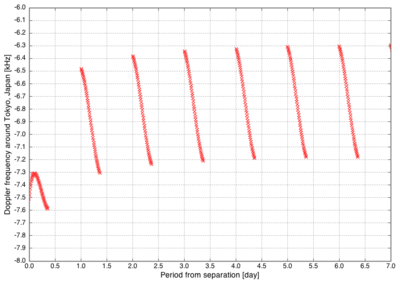